In many ways, it seems that demand for rail intermodal has skyrocketed overnight, but in reality, its success has been more than a century in the making. Below are six unique milestones that have contributed to developing the safe, reliable and cost-effective intermodal rail network we have today. Also known as “circus style,” “piggybacking” of wagons was pioneered in 1872 by P.T. Barnum’s circus. Barnum developed a crossover plate that allowed horses to pull circus wagons onto and off trains via a single ramp. Once onboard, circus wagons were rolled from train car to train car, a streamlined process that saved time, effort and money. In 1936, the Chicago Great Western Railroad built upon this approach when it modified several hundred truck trailers and loaded them onto its trains — making the railroad the first to move trailers and ushering in commercial intermodal. While intermodal piggybacking existed as early as the 1930s, the invention of a simple steel container established intermodal as we know it today. In 1952, Alaska Steamship Company created the first intermodal shipping container by converting World War II victory ships into vessels capable of handling shipping containers that could carry virtually any product. Starting in 1956, Malcom McLean and his new company, Sea-Land, began working with maritime shippers, freight railroads and truckers to develop a common standard, allowing containers to be easily transferred across modes of transport. Today, the shipping container has largely eliminated the need for handling individual pieces of cargo, resulting in drastically reduced shipping costs and delivery time. Alaska Steamship and McLean’s invention directly shaped international supply chains still used today. 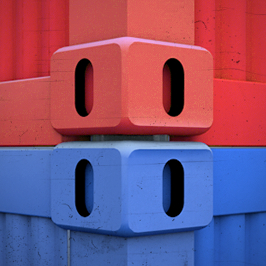 Early rail uses of shipping containers were inefficient since only a minimal amount of cargo could be loaded on a single railcar or train. In 1977, Malcom McLean partnered with the Southern Pacific Railroad (SP) to create and test the first double stacked intermodal rail car. The test was a success, and by 1980, efforts to improve rail economics led to the ability to stack containers on rail cars across America. This process — logically known as “double stacking” — allows a single train to carry as much freight as hundreds of trucks. Over the years, freight railroads have raised clearances, upgraded tunnels and strengthened rail lines throughout most of America’s nearly 140,000-mile freight rail network to accommodate double stacked intermodal trains. Since railroads are four times more fuel efficient than trucks, double stacking has helped reduce greenhouse gas emissions while significantly increasing intermodal efficiency for the industry and customers. The first rail terminals were established in the 19th century during the peak of railroad development. With the advent of intermodal and McLean’s shipping container, many of these original rail terminals were converted into intermodal facilities by 1960. The success of modern intermodal is primarily built upon strategically located rail terminals where freight is transferred between modes. In recent years, railroads have spent billions of dollars on building and expanding intermodal terminals and installing modern equipment, including GPS-enabled cranes that can transfer intermodal containers between trains, trucks and ships in minutes. The strategic locations of these terminals — more than 180 intermodal facilities in the U.S. alone — have made railroads tremendously competitive for domestic freight shipments and, in turn, helped reduce congestion on our nation’s roadways while improving shipping times for rail customers. In 1989, trucking magnate Johnnie B. Hunt traveled from Chicago to Kansas City aboard a business train owned by the Atchison, Topeka and Santa Fe Railway. He was so impressed with the journey that he soon signed an agreement to move truck trailers on the railroad’s flatcars, a significant leap forward in domestic freight movement. Since then, truck driver shortages have increased fuel costs and congestion on our nation’s aging highways — together with massive investment and improved reliability and cost-effectiveness — have resulted in railroads carrying an increasing share of domestic intermodal freight historically moved by trucks. This affordable domestic freight service has now become a competitive alternative to all-truck movements for journeys as short as a few hundred miles — proof of railroads’ commitment to keeping America’s economy moving, whether across the country or worldwide.