Three types of rail systems operate on the national rail network — intercity passenger, commuter and freight. Together, these trains help deliver economic growth, support job creation, provide crucial environmental benefits and increase our nation’s productivity and competitiveness. Explore more below to learn the differences, similarities and importance of the trains that will help meet the transportation challenges of today and tomorrow. Intercity passenger rail primarily refers to Amtrak’s intercity passenger services that connect people from one city to another. Congress created The National Railroad Passenger Corporation — also known as Amtrak — in 1970 to continue and improve intercity passenger rail for the nation. Headquartered in Washington D.C., Amtrak is an important part of America’s surface transportation system, providing an environmentally friendly way for millions of people to reach their destination each year. In fact, Amtrak is 47% more energy efficient than traveling by car and 33% more energy efficient than domestic air travel on a per-passenger-mile basis. 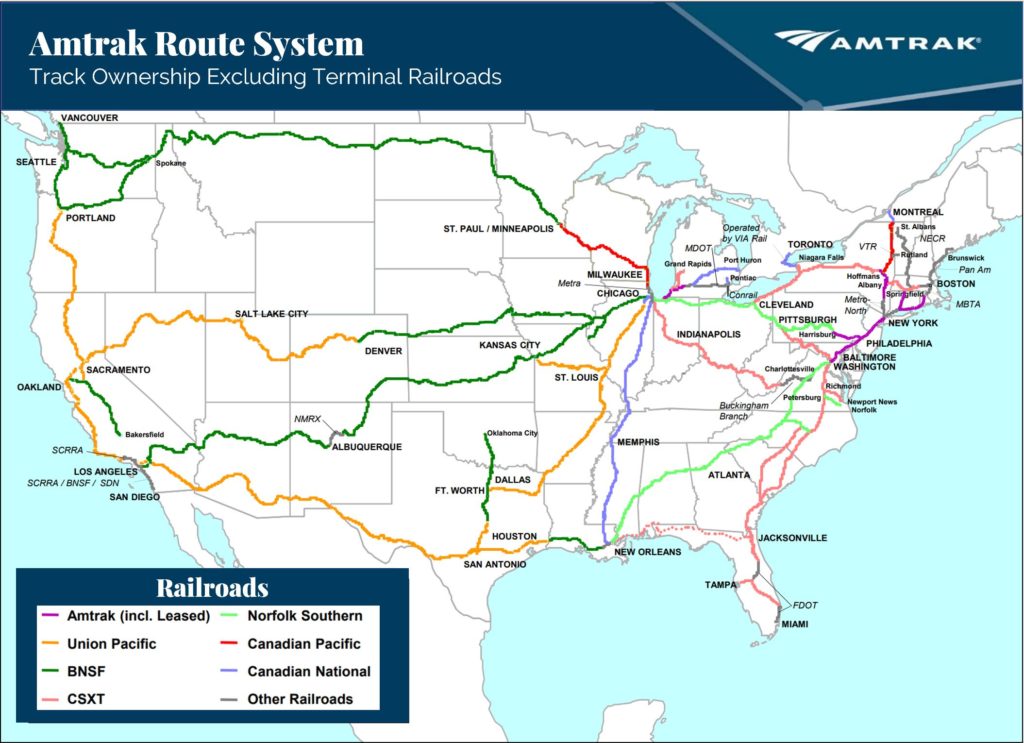 Of the more than 21,000 miles on which it operates, Amtrak owns approximately 655 miles, primarily in the Northeast and Michigan. Some of the remaining miles are owned by states or regional transportation authorities, but the vast majority are owned by freight railroads. 70% of the train-miles operated by Amtrak are on tracks owned by these host railroads.

Amtrak’s relationship with host railroads is governed by federal statute and by negotiated bilateral operating agreements. These operating agreements can include key terms such as train schedules, standard of performance and related incentives and penalties. Amtrak and host freight railroads each have designated staff that work together to manage the operations on these lines.

The federal government created Amtrak in 1970 and owns all preferred shares of Amtrak stock, while the President of the United States appoints its board of directors, which are subject to confirmation by the U.S. Senate. Pre-pandemic, most of Amtrak’s daily operating costs were covered by non-federal sources, including ticket revenues and support from state partners. However, Amtrak relies on federal funding for most of its capital expenditures. Currently, the federal government’s contribution to Amtrak is subject to annual appropriations. Commuter rail is a form of passenger rail service that traditionally operates within a metropolitan area connecting suburban or “commuter towns” with a central city. Public transit plays a major role in fueling America’s economy, with 87% of public transit trips connecting employees to work, retail and entertainment venues. Commuter trains typically operate mainly on weekdays, with highest frequency during morning and evening commute hours, and many have reduced weekend service. Most riders make trips of less than 50 miles for work, school or errands although some commuter operations provide services for considerably longer distances.

According to the American Public Transportation Association, there are 32 agencies throughout the nation that operate commuter railroads. Some operate their own trains, while others contract out for the service. Some major commuter railroads include the Long Island Rail Road (LIRR) and Metro-North in New York and Connecticut; the Maryland Area Regional Commuter (MARC); the Virginia Railway Express (VRE); Metra in Chicagoland and Metrolink in the Los Angeles region. On average, pre-pandemic, commuter railroads made over 500 million passenger trips each year.

Generally, commuter railroads are owned by state authorities or agencies. Half of commuter systems operate at least a little on freight track, but the combination of freight railroads and Amtrak is not most of the miles on which commuter rail operates. Funding for commuter railroads typically comes from federal funds from the Federal Transit Administration (FTA) as well as state and local funds and fares. America’s privately-owned freight railroads are the most productive and cost-effective in the world, connecting consumers and businesses across the country and the world while benefitting the environment and promoting safety. Shippers from nearly every industrial, wholesale, retail and resource-based sector of the U.S. economy rely on freight railroads to move their raw materials and finished goods to market domestically and globally. Freight rail accounts for around 40% of long-distance ton-miles — more than any other mode of transportation — and hauls one-third of the country’s exports. Operations are fully integrated across the North American rail network. The U.S. rail network consists of approximately 630 mostly privately-owned railroad companies with about 135,000 employees. There are two major categories of freight railroads:

America’s freight railroads overwhelmingly own, build, maintain, operate and pay for their infrastructure with little government assistance. Thanks to balanced economic regulation, America’s freight railroads spend approximately $25 billion a year on capital expenditures and maintenance expenses. These include locomotives, freight cars, tracks, bridges, tunnels and other infrastructure, equipment and technology. On average, freight railroads spend six times more on capital expenditures as a percentage of revenue than the average U.S. manufacturer.

Now that you know the differences between intercity passenger, commuter and freight railroads, let’s answer some questions that often come up when talking about America’s rail network.

What’s the difference between European and American rail systems?

What states produce the most tons of rail freight?

In 2019, the following states loaded the most freight:

The following states received the most rail freight:

Overall, the busiest place for railroads in the nation is Chicago, a status it has held for 125 years. Daily, nearly 500 freight trains and 760 passenger trains operate through the region. About 25% of all U.S. freight rail traffic and 46% of all intermodal traffic begins, ends or travels through the Chicago region.

Chicago is also a great example of partnerships between intercity passenger, commuter and freight railroads. The Chicago Region Environmental and Transportation Efficiency (CREATE) Program is an innovative public-private partnership involving six of the Class I railroads, Amtrak, Metra, the state of Illinois, the city of Chicago, and seven regional counties. Launched in 2003, the $4.6 billion plan includes 70 projects (31 of which are already completed) to improve the efficiency and effectiveness of Chicago’s freight, commuter and intercity passenger railroads. For example, the 75th Street Corridor Improvement Project (CIP) will reduce congestion where 30 Metra trains, roughly 90 freight trains and one Amtrak train cross each other daily. Many of the projects will also separate local street traffic and rail traffic, improving safety and easing congestion for local residents.

Do Amtrak and freight railroads both have to have Positive Train Control (PTC)?

Yes. The FRA recently announced that all 44 of America’s intercity passenger, commuter and freight railroads required to have PTC have met or surpassed the statutory requirements outlined in the Rail Safety Improvement Act of 2008. After years of tireless, methodical work, the nation’s railroads have created a fully interoperable PTC system capable of automatically stopping a train before certain human error related accidents occur. Specifically, PTC is required for rail operations on tracks over which intercity passenger or commuter rail operations take place, and over which certain types and amounts of hazardous materials are transported.