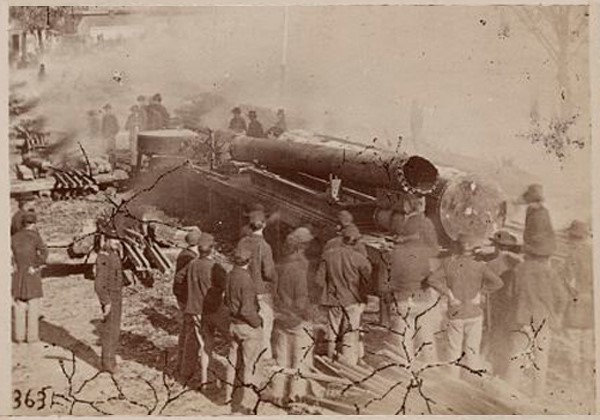 The industrialized Union possessed an enormous advantage over the Confederacy — they had 20,000 miles of railroad track, more than double the Confederacy’s 9,000 miles. Troops and supplies previously dependent on a man or horsepower could now move quickly by rail, making railroads attractive military targets. The Union controlled 70% of the country’s total miles of track and owned 96% of U.S. railroad equipment, which meant it was ideally prepared for damage replacement when bridges, rail rights-of-way or rolling stock were destroyed. This strength was an early indicator of rail’s ability to shape future military strategy. 2. A Turning Point in the Civil War

In the winter of 1863, President Lincoln ordered Union army reinforcements of 25,000 men and ten batteries of cannons to join the battle in Chattanooga, Tennessee. Thanks to the speed of freight rail, this torrent of troops and firepower covered the 600-mile distance in only eleven days. Since Chattanooga was a crucial Confederate rail and industrial center, many historians consider the Union’s victory in the Chattanooga Campaign to be the beginning of the end of the Civil War. 3. The Future of Combat: Railroad Guns

Moving massive artillery to battlefields presented significant challenges during wartime. In a letter dated June 5, 1862, Confederate General Robert E. Lee asked, “Is there a possibility of constructing an iron-plated battery mounting a heavy gun on trucks, the whole covered with iron to move along the York River railroad?” The newly conceived rail guns provided the mobility and force that changed future combat. The first railroad gun was used during the Siege of Petersburg in Virginia that same June. Called The Dictator, the cannon weighed more than 17,000 pounds when mounted on a flatbed railroad car. 4. The Precursor to Contemporary Military Vehicles

The cannons mounted on railroad cars meant a battery could fire while moving, while the thick armor protected troops. These iron boxcars, with openings for artillery fire, were the precursors to today’s tanks. Rifle cars — armored from the inside — protected rail repairmen and supply trains, serving as early models for infantry fighting vehicles. Battleships would successfully adopt similar mounted guns and weapon technology in the first and second World Wars. America’s entry into World War I pushed its railroads to new levels of operation. President Wilson nationalized railroads in March 1918 and guaranteed the return of the railroads to their former owners within 21 months of a peace treaty. The government ordered 1,930 locomotives and bought 100,000 new cars to transport supplies critical for making munitions and delivering the next generation of railway guns and artillery cargo to the U.S. Navy. The numbers of boxcar coal shipments and tank cars carrying petroleum, oils, lubricants and chemicals soared, while passenger train use was curtailed to help conserve precious fuel. 6. Carrying the Wounded On Hospital Trains

The Civil War introduced wartime use of trains for medical evacuation, improvising rough versions of hospital cars from available rolling stock. This tradition carried into World War II. In 1917, the wounded were cared for and moved in custom-built unit trains made from converted Pullman cars. Army hospital trains flourished during World War II when medical evacuation by air was in its infancy. Two years before America entered World War II, the U.S. Army began building enhanced hospital unit cars, boasting new features such as side doors to facilitate patient loading and compact operating rooms. In 1940, just before World War II, American railroads moved 70% of all freight transported in the United States. That number skyrocketed between the war years of 1942 and 1944. The nation saw record-setting increases in passenger and freight volume, with railroads carrying more than 90% of the military’s freight and 98% of its personnel. Massive troop movement filled available passenger trains, and railroads worked overtime to accommodate demand. Period ads showing trains packed with servicemen encouraged patriotic Americans to avoid all unnecessary travel. Diesel-electric locomotion was first introduced during World War I, but it was during World War II that it became truly integral to expanding America’s rail capacity during wartime. Unlike steam locomotives, the diesels could travel longer distances without stops for servicing or water. They could also be mass-produced to meet the growing rail demand of America’s booming post-war economy. The conversion was well underway by 1944, with 608 diesel-electric locomotives built that year, compared to only 491 steam locomotives. Once again, U.S. railroads led America and its allies to victory by developing and deploying new transportation technology. From the end of 1941 to June 1945, American railroads carried nearly 44 million servicemen and women, and in the war’s final years, the United States averaged 2,500 troop trains monthly. America’s railroads continued transporting armed forces personnel in the Korean War (1950-1953), with large numbers of unit trains bringing troops west to ship out to Japan and Korea. During the Korean War, the Army bought flatcars capable of moving the new, heavier M46 Patton tanks. At the same time, the Navy purchased DF damage-free boxcars, specially constructed with a load securement system for the safe transportation of ammunition. Early on, American railroads learned that technical innovations improved safety and efficiency — qualities the country came to rely on in times of war and peace. That dedication to advancing technology continues to enhance military rail transport operations today.